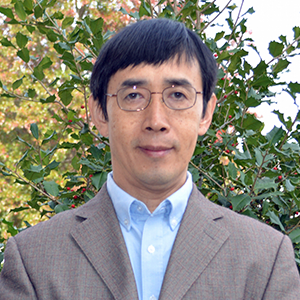 My research is on genetics, genomics and breeding of marine molluscs. I am interested in genetic and genomic research that advance our understanding of molluscan biology and evolution, as well as studies that may lead to the development of superior stocks for molluscan aquaculture. Specific research in my lab may include selective breeding for disease resistance and superior growth, the development of triploids and tetraploids for aquaculture, classification and phylogenetics of molluscs, identification and mapping of genetic variations underlie economically important traits such as disease resistance, genome/transcriptome sequencing and characterization, molluscan immunity and stress adaptation, and the evolution of sex determination.

Dr. Ximing Guo received his Ph.D. from University of Washington (Seattle). He joined the Haskin Shellfish Research Laboratory in 1992 as a postdoctoral researcher and became a Research Assistant Professor in 1995. He was promoted to Associate Professor in 2001 and has been a Full Professor since 2007.