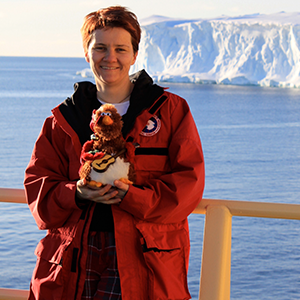 I often describe my research interests as being stuck between a rock and a wet place: My starting point are the sediments at the interface between the water column above and the geological archive below. I want to understand how geochemical proxies are formed and preserved, and how we can read and interpret them – think CSI Terra Oceana. I want to know what goes into the sediments, but also how macro and micronutrients get recycled back into the water column, feeding the surface ocean from deep below. Oxygen is often the gate keeper of these nutrient fluxes in and out of the sediments. Generally speaking, the amount of oxygen present is regulated by biology and by the physical environment, especially temperature. Transition metals and their isotopes are particularly well suited to track changes in the amount of oxygen in the environment because their solubility is a function of ambient oxygen concentrations. Ultimately what I want to know is how changes in the biogeochemical cycling of nutrients and metals are affected by—or have an effect on—the biological evolution and on changes in the physical environment, including the climate.

I did my undergrad degree in Germany studying Geography, but it was during a year abroad at Edinburgh University that I discovered my love for Geochemistry and Earth Sciences. This experience inspired me to change course and to complete an M.Sc. in Oceanography and eventually a Ph.D. in Geochemistry, both with Rachel Mills at the newly opened Southampton Oceanography Center, UK. From there I moved to the USA, first for a postdoc with Clark Johnson in Madison WI, then another postdoc with Tim Lyons at UC Riverside, before I eventually landed a faculty position at Rutgers.