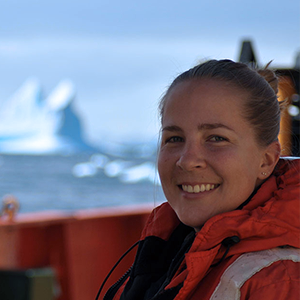 As a Research Analyst in the Center for Ocean Observing Leadership (COOL), my broad research interests include the long-term impacts of climate change on marine ecosystems and the ocean’s role in the global carbon cycle, particularly at high latitudes. I am specifically interested in the biological component of the carbon cycle, such as the spatial and temporal variability of primary production, how primary productivity is influenced by top-down and bottom-up processes, and the role of zooplankton in biogeochemical cycling and sequestration of carbon. In addition to my biological oceanography research interests, I also enjoy developing software programs (using Python) for data maintenance and quality control.

I received my M.S. in Marine Science in 2012 from the College of William & Mary at the Virginia Institute of Marine Science. For my thesis research, I investigated the microzooplankton community structure and grazing impact along the Western Antarctic Peninsula as part of the Palmer Antarctica Long-Term Ecological Research (PAL LTER) project. I went on to work as a data analyst in the pharmaceutical industry for several years where I gained experience in large database management before returning to my passion of oceanography research as part of the Center for Ocean Observing Leadership (COOL). From 2015 – 2018, I was part of the Data Evaluation team at Rutgers for the Ocean Observatories Initiative (OOI), where we assisted with the testing, deployment, and maintenance of the OOI Cyberinfrastructure system for data delivery to public users. I am now involved in various projects for the COOL group, mainly in the role of research programmer for data review and quality control.