Of all environments on Earth at which life flourishes, deep-sea volcanoes are probably the most extreme. Temperatures within many of these systems range from 2-400°C, pressures are in excess of several hundred atmospheres, and concentrations of hydrogen sulfide and many heavy metals (e.g., Cu, Zn, Fe, Cd, Pb) frequently exceed levels normally considered toxic to biological systems. During the cycling of seawater through the earth’s crust along the mid-oceanic ridge system, where most deep-sea volcanoes occur, the reaction of seawater with crustal rocks at high temperatures enriches the hydrothermal fluids with reduced organic and inorganic chemical species. The hydrothermal fluids are then emitted from warm (≤ 25°C) and hot (~350°C) submarine vents at depths reaching about 4000 m (Fig. 1). Since sunlight does not reach the deep ocean, the organisms that inhabit deep-sea vents do not rely on photosynthesis for the production of organic carbon. Instead, microbes that colonize deep-sea vents take advantage of redox gradients (e.g., oxic/anoxic region between oxygen-depleted hydrothermal fluids and oxygen-rich seawater) to mediate the transfer of chemical energy into biochemical energy (e.g., ATP). Microbes then use the energy stored in ATP to synthesize organic carbon from carbon dioxide, a process overall known as chemosynthesis (synthesis of organic carbon using chemical energy).

In 2006 a volcanic eruption occurred along the East Pacific Rise (EPR) ridge crest between 9°48’N and 9°51’N. Seafloor images along the ridge crest documented an extensive flow of fresh lava, which was covered with white microbial biofilms in areas of vigorous hydrothermal flow venting (Fig. 2). During a series of oceanographic expeditions on the R/V Atlantis, Dr. Vetriani, in collaboration with R. Lutz , G. Luther , T. Shank , S. Sievert and N. Le Bris , among other researchers, used the Deep-Submergence Vehicle Alvin to explore the post-eruptive vents on the EPR (Fig. 3). During our dives we collected microbial biofilms using experimental microcolonizers and we conducted co-located in situ fluid chemical measurements. The microorganisms that colonize deep-sea vents are expected to be able to adhere to and colonize solid substrates (to establish biofilms and to better access nutrients in these highly turbulent environments), to be metabolically versatile (to take advantage of the dynamic redox gradients typical of these environments), and to use detoxification mechanisms that allow them to survive in an environment where many toxic heavy metals are present at high concentrations. Back in the laboratory, we are investigating these microbial biofilms using several experimental approaches, including electron microscopy, microbial growth experiments, genomics , transcriptomics, next generation sequencing and bioinformatics.

Parallel sequencing analyses of the biofilms’ metatranscriptome (i.e., the total pool of transcribed RNAs) indicate that biofilms exposed to different temperature (up to about 50°C) and biological regimes (presence/absence of animal colonists) are dominated by a group of Proteobacteria, the Epsilonproteobacteria, which are optimally adapted to colonize environments defined by sharp redox gradients. Furthermore, microbial growth experiments led to the isolation of several pure cultures of Epsilonproteobacteria (Fig. 4) that can establish biofilms, regulate community gene expression using chemical signals, and conserve energy using various inorganic chemical species found in vent fluids. Finally, the genome sequences of some of these organisms are helping us to identify specific metabolic pathways critical to survive in the harsh deep-sea vent environment. We are currently using these organisms as laboratory experimental models to understand their physiology, metabolism and gene expression. 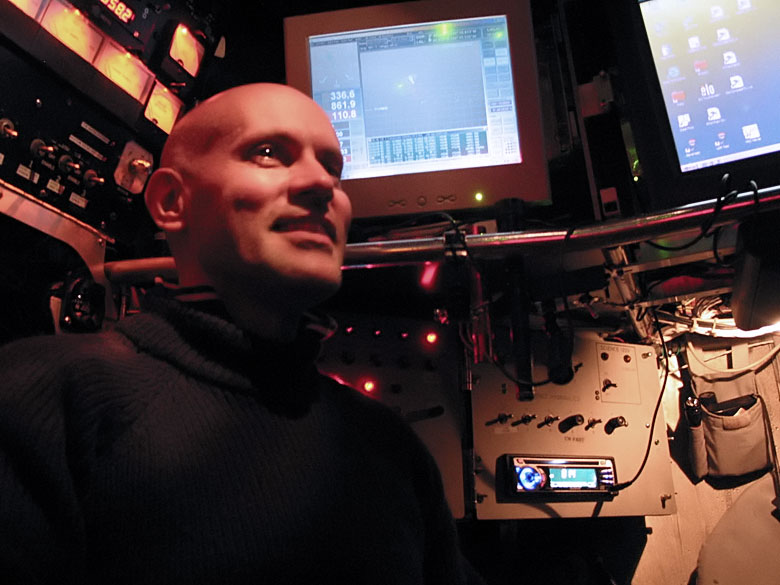 Costa Vetriani is an associate professor in the Department of Biochemistry and Microbiology and IMCS, and the director of the Microbiology Undergraduate Program at Rutgers University. He studies microorganisms that live in the deep ocean. He began his research activity in a clinical microbiology lab and, as a PhD student, he was trained as a prokaryotic molecular geneticist. In 1995 he moved from Rome, Italy, to the United States, where he joined the Center of Marine Biotechnology in Baltimore, MD and, later on, Rutgers University. In 1995 Costa Vetriani participated in the Microbial Diversity summer course at the Marine Biological Laboratory in Woods Hole, MA. For him, that was a career changing experience, and one that he would recommend to any microbiology student. Since 1996 Costa Vetriani participated either as research or chief scientist in 16 deep-sea expeditions in the Pacific and Atlantic Oceans, and dove in the Deep-Submergence Vehicle Alvin many times. Costa Vetriani is a passionate SCUBA diver and underwater photographer . For more information about Costa Vetriani’s research, visit the Deep-Sea Microbiology Lab website.