One of the world’s greatest pioneers in the field of biological oceanography, Dr. Paul Falkowski is a distinguished professor in the Departments of Marine and Coastal Sciences and Earth and Planetary Sciences at Rutgers University.

Focusing primarily on phytoplankton, coral, and the primary production of aquatic organisms, Dr. Falkowski studies the biophysical processes controlling ocean productivity, especially the roles of the nitrogen and iron cycles in ocean biogeochemistry and climate.

The knowledge that climate strongly influences the distribution and diversity of all animals and plants has been historically clear, but its effect on microbial communities were poorly understood. In the 1970s, Dr. Falkowski was among the first scientists to observe this chain of linked processes at the source of all life’s origin– our oceans– that now informs predictions about how phytoplankton communities will change in the future and impact global climate.

In the evolution of Earth, Dr. Falkowski’s research has been influential in identifying how microbes became a major force in transforming this planet to make it habitable for animals, including humans. His research observes how electron transfer reactions are mediated throughout our planet and have changed its geochemistry over time. Over the course of his 42-year career, Dr. Falkowski has published over 300 papers in leading peer-reviewed journals, edited and authored 6 books, and advised more than 100 graduate students, postdoctoral fellows, and visiting scientists at Rutgers University, internationally known as a top-tier academic research institution in the field of biological Oceanography.

Having received his undergraduate degree in biology from the City College of New York, in 1975, Dr. Falkowski emigrated to Canada and obtained a PhD in Biology and Oceanography from the University of British Columbia. Faced with the prospect of working in a medical school in Canada, or going to sea as an oceanographer, Dr. Falkowski chose the latter and completed his postdoctoral research at the University of Rhode Island. Following his postdoctoral work, in 1976 he was hired at the Brookhaven National Laboratory as a staff scientist in the newly formed Oceanographic and Atmospheric Sciences Division, where he developed the field of environmental biophysics. Since then, he participated in over 45 cruise expeditions to regions including the subtropical Atlantic, Antarctica, and the Black Sea.

In 1998, Dr. Falkowski moved this research group to Rutgers University where he now holds tenure as the Bennett L. Smith Chair in Business and Natural Resources, and is the founding director of the Rutgers Energy Institute. 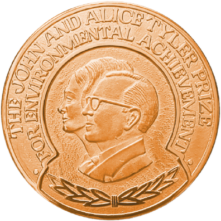 “Established in 1973 by the late John and Alice Tyler, the Tyler Prize for Environmental Achievement is one of the first international premier environmental awards. This global environmental prize recognizes individuals who have contributed in an outstanding manner to the scientific knowledge and public leadership to preserve and enhance the environment of the world. Recipients encompass the spectrum of environmental concerns, including environmental policy, health, air and water pollution, ecosystem disruption and loss of biodiversity, and energy resources.”