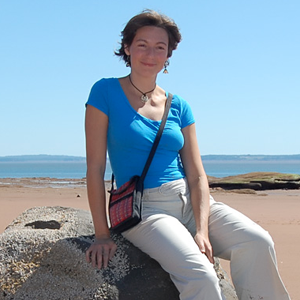 My research has focused on the physical processes that control temperature, salinity and velocity variability in the coastal ocean. During my graduate work I studied the dynamics of estuaries, in particular the processes that control circulation, stratification and dispersion. These physical processes have both theoretical and practical applications. For example, the competition between the landward and oceanward salt fluxes in estuaries determines the longitudinal structure of salt and therefore controls where fresh water is available for human consumption. During my postdoctoral research I studied the temperature fluctuations and velocity patterns in the Santa Barbara Channel, California. This region is of particular ecological interest because it hosts giant kelp forests which are some of the most productive ecosystems in the world. Previous studies have shown that the large diurnal temperature changes that this region experiences during the summer can be associated with the input of nutrients into the kelp forest. Currently I am part of a project that aims to understand the role of the coastal ocean on hurricane intensity. In collaboration with the National Centers for Environmental Prediction and the Naval Research Laboratory, we are assessing the impact of glider data assimilation on the operational ocean models that provide the initial conditions for the NOAA hurricane forecasting model.

I was born in a small city in Colombia but was raised in the second largest city, Medellin. In spite of all the social issues that the city has suffered for years, its people possess a remarkable entrepreneurial spirit and I very much enjoyed living there. I obtained my undergraduate and masters degrees in theoretical physics at the Universidad de Antioquia, the main public university in Medellin, and later worked as a physics lecturer in the engineering department. I enjoy physics and math very much but I am also interested in the conservation of the environment and have a deep respect for nature. Following my bliss, I took some classes in the Oceanography program at Rutgers University and fell in love with it. I decided to join the graduate program at Rutgers, completing my PhD in 2013. I then took a postdoctoral position at the University of Connecticut where I continued working in coastal physical oceanography and subsequently I taught for two years in the Coast Guard Academy. Currently I am a research analyst with the Rutgers University Center for Ocean Observing Leadership (RUCOOL). I see my work in Oceanography as an opportunity to help actively in the conservation and awareness of our oceans through the understanding of the various physical processes that affect the marine ecosystems.