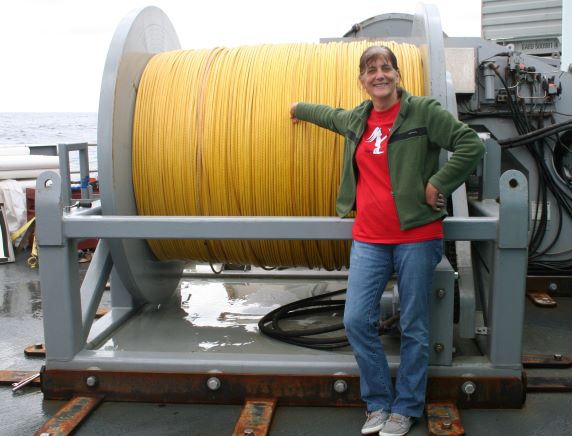 We got into port right on time on Dec 19th.  We’d been packing up and putting things away for days.  But no matter how well prepared you are it is no match for the whirlwind that is “’demobilization”.  It starts out slow with the pilot coming onto the boat and guiding us in, and then once we are docked, then the immigration official comes on board and sits down with the captain to process all our passports and clear everyone to come off the ship.  Only then can other people come on to help us unload – and then it’s all non-stop as the action begins.

At the end of every cruise, all of the science gear gets packed and loaded out.  A lot of packing was done at sea, but now much of what we packed has to be put onto pallets and taken onto the deck and then it is lifted by crane onto the dock.  One piece at a time or one pallet at a time.  Then it is all packed into containers on the dock to be shipped back to where it came from.  Remember how crowded 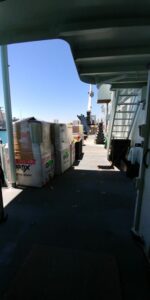 the fantail’s deck was during the cruise? Everything had to go—the multicore, the generator, the big block that was 5 feet tall, the winch and drum with the yellow line, the little blue winch, the vans with the coring gear—all of that gear that was was just there for the work we were doing and it has to go because the next scientists don’t need it or want it – instead, they need the room on the deck for their work. 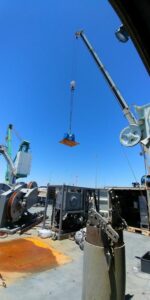 We had all the gear we were working with as well as a number of spares that had to go. Time is prescious too- by the end of 2 days – all of it had to be gone.  One of the humorous part of that is where our huge winch was—someone put a tiny spool of line that made it look like someone shrank the winch! (see the photo below to the left)

It was not just science team that had a lot to do—so did the crew.  When we took everything out of the main lab – the ship’s crew 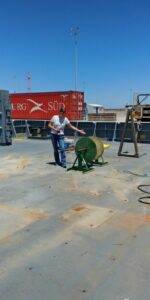 filled it up again – all of our safety gear had to be accounted for and inspected – so the lab was filled with life vests and immersion suits — it was quite the change-over. This was so the ship and its crew could go through their own inspection – which happened because it was the end of the year. 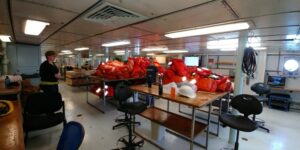 hat had to be on their way as quickly as possible and kept cold!  There was all the heavy gear that had to go into containers and be sent on ships – much of that stuff was contributed to our voyage by other institutions – so we had to send that back to them.  To save costs, my gear went home in the container with the coring gear—and I will have to pick that up when it gets back to Oregon and then have it shipped back to Rutgers in NJ.  We were right down to the wire getting everything shipped before the ship left port on Dec 24th (yep, Christmas eve!!!) We did get everything shipped – off the dock and on its way.  But we are not done yet! Until everything is safely home we still have work to do.  We won’t be done until March at th 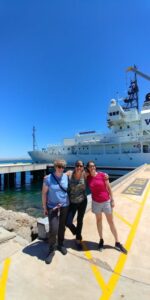 But for now, everyone has headed home for a well-deserved holiday.  I said good by to all the team leaders on the dock just before the ship left and then I too took off… not quite for home though.  There was not time to get home — so I spent Christmas in New Zealand with family.

Stay tuned for the last chapters in a month or two.