Coring is dangerous work, but that’s what we went out there to do. So we took precautions and made sure everyone was safe, even in the middle of tricky situations. It’s so common a phrase, but Safety First is vitally important when you’re in a dangerous business. 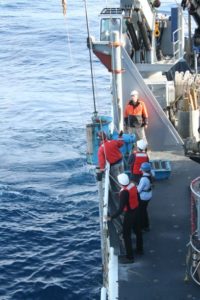 You’ll notice in the action shots of the coring process, everyone is wearing a work vest and a hard hat. Most people are wearing Wellies, too, and a lot of them have steel toes. There’s more to this getup than looking like a gathering of Orange Puff People, of course. A work vest is a little different than a regular old life jacket – it fits closer to the body so it doesn’t get in the way as you move around on deck. Each one has a little beacon that will flash on immersion.

In some photos, you’ll see Liz and Natalie wearing Mustang jackets. That’s really just the brand name, but they’re very special (and rather expensive) orange jackets that double as life jackets. When immersed in water, they inflate. They’re used mostly in colder climates (like the Southern Ocean) when wearing a thick coat and a work vest are mutually exclusive.

But what about when we’re not coring? Drill, drill, drill. We had a number of safety drills at sea, one immediately after leaving port. The crew had even more. We have to know where to go in case of an emergency, and for the science party that was pretty straightforward – grab your life vest, immersion suit, and a hat (in case of rain, you want to be able to see) and meet in the main lab. Roll is called, and anyone missing is found by a designated crew member.

Now, that’s the end of the drill, but in real emergency what we did next would depend on what kind of problem we were having. For a fire, we’d all just sit tight as the crew fought it, and we’d avoid that part of the ship for a while as things were cleared up. If we had to abandon ship, we’d put on our immersion suits and head to the life rafts stored on the O2 deck (one level above the bow). 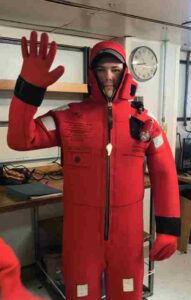 Ah, yes – the immersion suits. Colloquially known as Gumby suits, for fairly obvious reasons. They’re full body suits made of neoprene, and they’re designed to keep you buoyant and warm (at least, warmer) in the water. They also help you stand out on the water with the bright orange and the reflectors. Some people don’t like them – being in a full body neoprene suit can make your body do weird things, because it’s a little claustrophobic in there. I didn’t mind mine too much, but I certainly wouldn’t want to need to put it on. They’re not terribly comfortable, although they certainly remind you of the foot-including pajamas you wore as a kid.

We made it all 48 days without a single emergency incident, and even though you’ve heard about some interesting problems from Liz, we never had to muster for anything other than a drill. I chalk that up to a hard-working, well-informed, careful crew, and a well-built ship. So a very hearty thanks to all the crew – engineers, watch-standers, mates, deck hands, and captain – and the coring techs for helping us do some Safe Science!