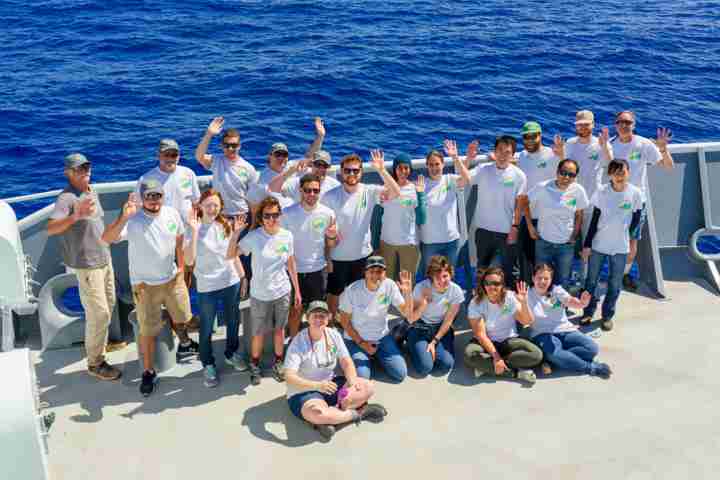 Well, that’s it. That’s the end of the CROCCA-2S research cruise. We pulled into port at 0730, half an hour early because we completed our survey ahead of schedule. We were all amused by the giant structures that didn’t move. It feels very strange indeed not to be rolling around on the ocean anymore.

We’ve all learned quite a bit, whether it was our first or tenth cruise, and we’ve made a lot of new friends. I’m hoping we’ll all be able to stay in touch.

So what exactly did we learn, apart from all the science?

Somehow, I found it easier to pack up my kit on the Thompson than I did at home. Maybe it’s just because I’m not wondering what to take here – I’ve got to take everything I’ve brought. People with more souvenirs have a bit of a harder time, but I can wear mine. The mug I bought fits comfortably in one of my Wellies. Here’s hoping it’s padded enough in there for the flights home.

My sources were right about the food – it was delicious. Particularly the mushroom risotto and the mashed potatoes. I didn’t eat all that much ice cream, surprisingly. I was too busy eating cake, cookies, scones, and banana bread.

Mealtimes were a great relief, at least for most of the science party. Lunch was by far the most well-attended meal, as both watches were on within half an hour of it. Having a regular schedule was nice, too, and lent a routine to otherwise spastic days.

The biggest thing I noticed about the head was the fact that it moved. I didn’t mind the rolling or pitching of the swell in any other room, but trying to take a shower in a 4 meter swell is less relaxing than I’d like.

Fortunately, sharing a bathroom between four people isn’t all that bad, especially given the sinks are in the staterooms. It’s a lot like a college dorm, just smaller.

Yup, it was a good idea to dress warmly. I myself brought too many t-shirts and not enough sweaters, but layering was certainly the key. I never had to use my foul-weather pants once, though, which is surprising.

You’ve seen some of what we’ve done in our downtime on the blog already. I was woefully unprepared with movies and books thanks to a tablet malfunction, but everyone else seemed to do well. Card games, Trivial Pursuit, and Scrabble were quite popular as group activities. Books, TV shows, and sleep were also popular.

We’re not quite allowed outside the shipyard yet – customs still has to clear us and we’ve got a lot of unloading to do – but that’s the end of the CROCCA-2S travel by water. One last, scientist-scattering trip through the air, and all our hard work starts to be analyzed. The process will take years, but it’ll be well worth it.