After being beaten up by the wind and the waves for the last 4 days it has finally laid down out here.  Yesterday really was the worst of the cruise in terms of discomfort. It’s not just how hard the wind blows but where on the ship it’s coming from – we’ve been lucky so far that when the waves and wind were this bad we were generally running with them – that is a tail wind – or to mariners, a following sea.  A follo 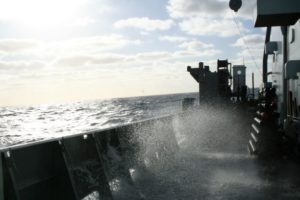 wing sea is remarkably comfortable to ride in – when it is on the bow, or nearly in the bow– that is beating into the wind- and I think that term says it all – you feel pretty beaten up when the ship is crashing into waves and wind head on.  With the waves being a bit off our starboard bow – that meant we also got a bit of a roll as well. Things that hadn’t’ moved all cruise went flying. A number of drink bottles and glasses hit the floor in the last day or so. Also some of the people trying to clean it up.  But all is better today with the winds down and the waves too—it is another beautiful day in the Indian Ocean.

And we are almost back to Freemantle.  For the last 20 hours or so, we have been mapping Perth Canyon.  We were asked to do this because there was an earthquake recently (a couple of years ago) and they want to know if there were any changes to the sides of the canyon.  So, just like we have been doing for the last month – we are using our echo profilers to make a picture of the bottom of the canyon.   The tricky part was – that canyon is in a marine reserve.  To do this work we applied for and got a permit, but it requires that we keep people posted on the bridge to look for whales and dolphins.  Sure enough some dolphins came along to play on our bow wave – but the regulations require we had to stop and avoid them—so without a bow wave to play in, they left (sorry no pictures….).

One of the hardest things about being at sea is being on the ship during the holidays.  We made the place pretty festive for Thanksgiving…  But Christmas is just around the corner.  We won’t be here but the ship’s crew will be.  The head cook asked us if we wanted to make gingerbread houses to brighten the place up… so we said yes…but in the end we made a gingerbread Thomas G. Thompson.  It was definitely a team project – and it came out stunningly well – especially the dioramas of the labs and coring sheds… 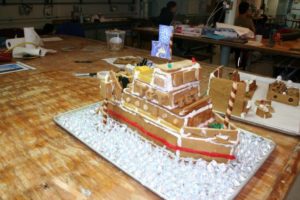 .it was a good way to keep busy while it was too rough to do anything else…

Today it was calm enough to start on the big tasks – we put away the multicore.  Stowed the rest of the cores in the reefer van and generally cleaned up…. 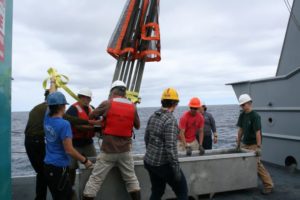 Tomorrow at 5 am we will be at the Pilots station to take on the pilot who will take us into port… almost there!!