As we steam our way to our final survey and things start to get packed up, we start to have a little more free time. Some of us have decided to sleep a little longer, but there’s a lot of fun stuff to do when you’re up. And now that the watches have changed to daylight hours, we’re all able to do more with our friends across the watch.

Friday night, for instance, a handful of us went stargazing at various times. The stars out here are a lot more vivid than I’ve seen before – it’s a combination of being in the Southern Hemisphere, where the constellations are different, and having no light pollution from a city interfering with your eyes. The three of us in my little group laid down on the deck and watched the shooting stars. There were at least a dozen of them. There was supposed to be a comet, too, but we didn’t see it. It was a little cloudy, especially as time went on. 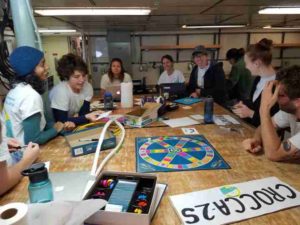 Those of us on the “day watch” have been working on a custom crossword puzzle created for us by the night watch. It includes a lot of inside jokes, not all of which we all know. But some are fairly obvious, like Aidan’s nicknames (“Foram Boy”, or just “boy”) or Chris’ touchdown call (“There’s the hit!”). Others were a little more obscure, or for that matter related to general oceanography.

As a return gift, the day shift created a customized Trivial Pursuit game for the night shift. The categories were changed to things like Operations, Personnel, the Ship, Science, and Down Time. The nighters split into two teams, with me reading the questions, and it was a very close game. Liz’s team won (no surprise there). 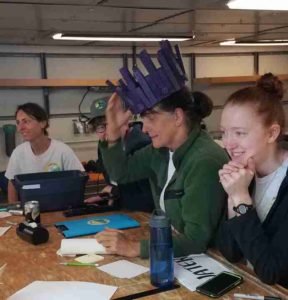 The Ping Pong Tournament to decide the Championship of the Southeast Indian Ocean is well under way. So far Harris has won for his division, but we’re still waiting for the elimination rounds of the other one. My money’s on Aidan “the Albatross” (or it would be if I had any), but “Rattled” Vince could pull a surprise win.