We did our final Jumbo Piston Core (JPC) yesterday. In the end it was a success, but the process was rather epic. The corer went over without a hitch (our team is well oiled by now) and the hit on the bottom looked good and the pullout was like butter (just as we had hoped). But when it came to pull the core in – the trigger arm with the trigger core had wrapped around the wire. At least 16 times (by my count). This often happens with wire – that und 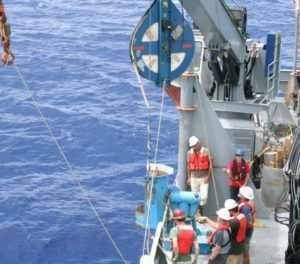 er tension it will spiral – and we have short length of wire that feeds down our coring pipe and holds the piston – so it must have decided to spiral a lot on the way up – and it had a lot of time to do it – 3825 meters — that is over 2 hours on the way up with over a ton of weight pulling on it. That was the issue.  The problem it created is: trying to pull that mess in – you can’t just pull a snarl in through the block and onto the deck.

So what to do?
The most important thing in this sort of situation is to stop, 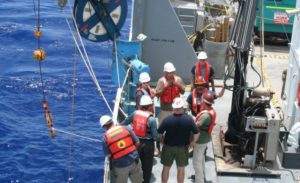 look at it and put everyone’s head together and come up with a plan to go forward. Our coring team did just that. They tackled each of the steps as they came and figured out a solution to each step. Mind you – it is important to realize that once we had a snarled trigger line we were in totally uncharted territory, because we are coring with line not wire – so there were added steps that no one has had to deal with before. Yep, you heard me—totally uncharted territory and our team was amazing.
First they tried to get the trigger core off but it was wound too tight. So then they tied off the line that held the trigger core to the ship and took the trigger out so we could pull in the big core. Then they pulled the whole mess in as far as possible. But you can’t put a snarl like that through the block. So then, they attached a shackle to the top of the snarled line.  What that did  was hold onto the trigger core (that is the rope in the photos) but hold it with essentially a big donut around the wire that was holding the big piston core. That rope  was wound so tight that the wraps were holding it up—not it’s own shackle to the trigger. So, after a couple of very, very, careful unwrappings of the rope, the snarl let go and free fell down onto the top of the big core – but we still had hold of it – and it was mostly unsnarled.
That meant we could pull in the big core and put it in its cradle. There was still some of the snarl left hanging onto the top of the big weight once it was a 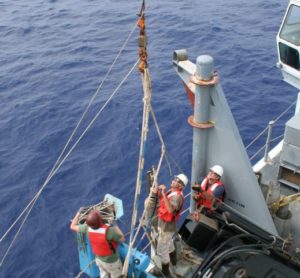 Then the issue was lifting the trigger core into its holster. That trigger line is pretty long so in the end they pulled it in, tied it off and doubled over to get it on. But we had it.
I’ve said before piston coring is not for the faint hearted. It took over 2 hours of problem solving and persistence to get all our gear back onboard after the hit the surface, and this had to be done so that we could keep coring. Our coring team really has what it takes.